Do you know about Eisa, a traditional performing art of summer in Okinawa? (Okinawa City)

This is my first article since registering, so I would like to introduce Okinawa City  and its summer features.

Have you ever heard of Okinawa City?

What kind of place is Okinawa City?

To start simple,i will begin with the following list of declarations made by the city.

1.Declaration of International City of Culture and Tourism (1974)

2.Declaration of Peace City for the Abolition of Nuclear Weapons (1985)

The city has made five declarations and is working on them as its goals. In addition, as the city is located next to a U.S. military base, the music and performing arts have flourished in the area since the end of World War II

"Although the city has not yet made a declaration, it is making various efforts to become a "City of Music. In addition, they are also working to preserve and pass on the traditional performing arts that remain in the region, making it a region that is truly full of Okinawa.

One of Okinawa City's declarations is the "Eisa City Declaration.

This is one of the major events held annually in Okinawa Prefecture, the "Okinawa All Island Eisa Festival," which attracts about 300,000 visitors every year, and is a major festival that has become a goal for eisa performing groups.

In 2007, Okinawa City issued the "City of Eisa Declaration" intending to become a Mecca for Eisa. 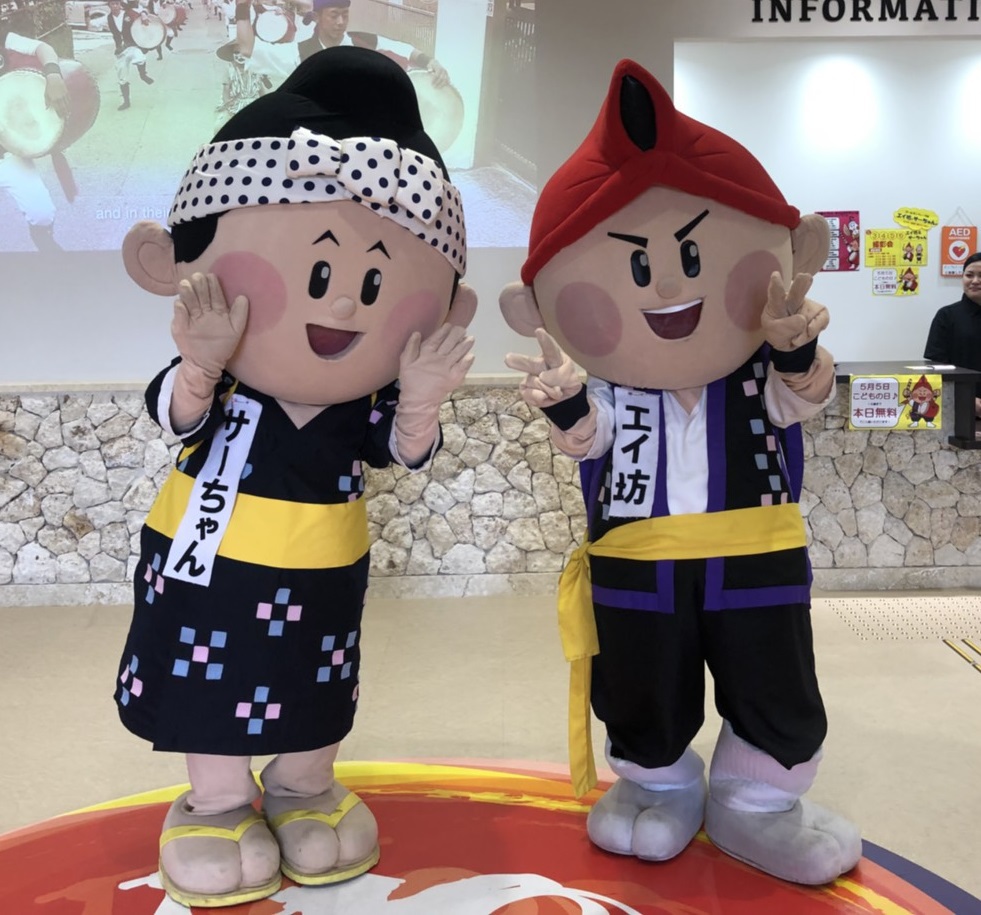 These characters were created to promote the city of Eisa. Sa-chan is on the left and Eibo is on the right. In addition, there are "Ta-kun" and "Sanabii", making a total of four characters.

Nowadays, the eisa characters are very popular not only among children but also among adults.

June 13th is the day of the declaration of the City of Eisa. 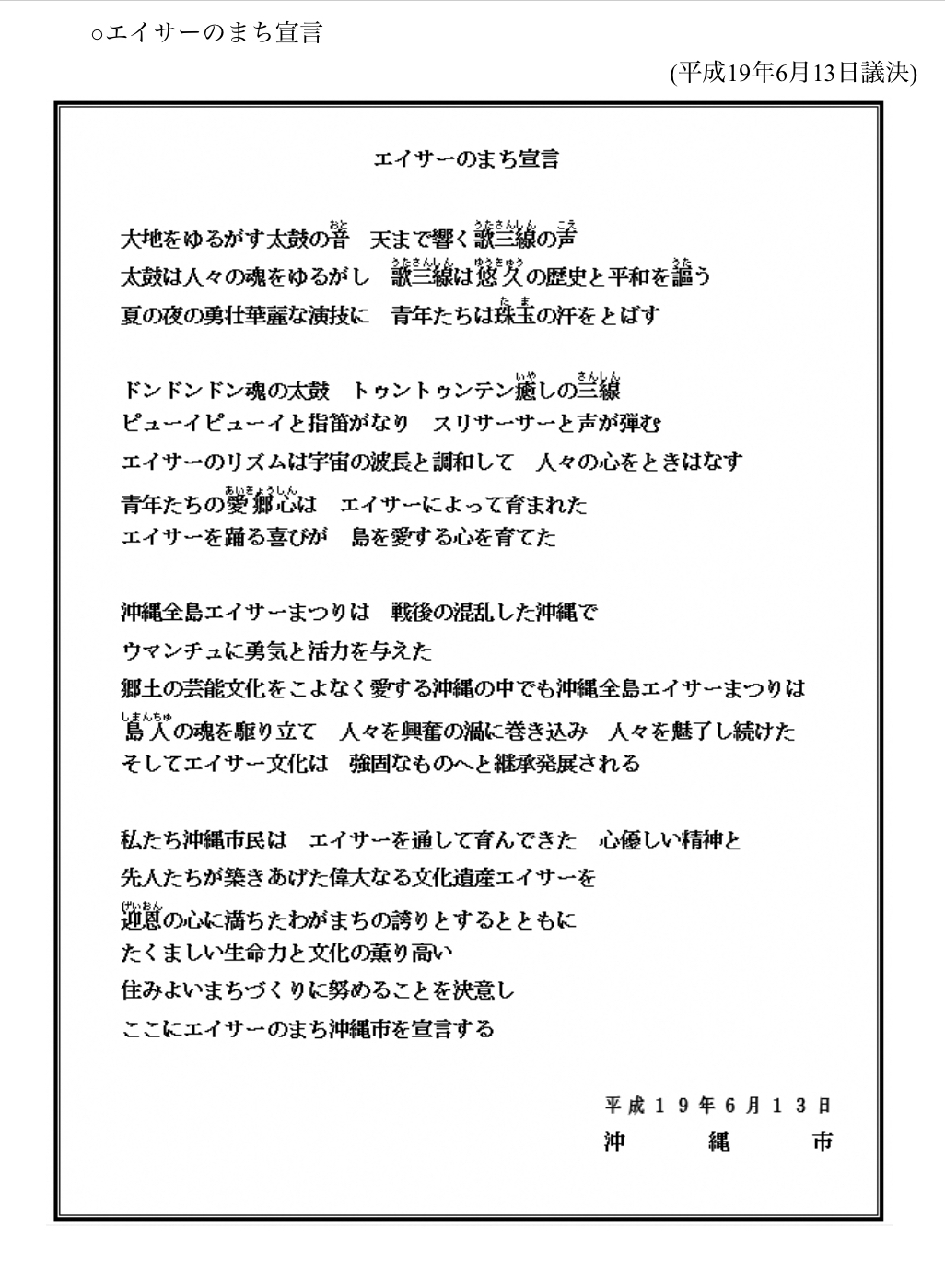 Isn't it such a powerful declaration?

In past years, "Eisa Night" started every weekend from around the day of the declaration of Eisa City until the week before Obon, and various Eisa other events were held every weekend in Okinawa City.

This year, as in last year, eisa-related events have been cancelled, and the Okinawa All Island Eisa Festival has also been cancelled.

In February this year, as part of the 65th anniversary of the Okinawa All Island Eisa Festival, the first Eisa Drama was held.

was aired in February this year. If you live in Okinawa Prefecture, you may have seen it.

Here is the trailer.

It's hard to convey in writing, so I want you to see it. The last part of the festival was a heart-warming ending for all the island eisa festival fans and everyone involved.

The origin of eisa is surprisingly old, it is said to be 400 or 500 years old, but there is still no definitive proof.

In "Omorosaushi", a collection of songs written during the Ryukyu Kingdom era, there is a word "Esa Omoro", but what we know for sure now is that in 1603, a monk from Iwaki, Fukurochujin, was almost shipwrecked on his way to China at that time, and arrived in Ryukyu. It is said that the Jangara Nembutsu Odori, a dance similar to the Eisa dance that is performed during the Bon Festival, still exists in Fukurochujin's hometown of Iwaki City.

In Okinawa, it is danced after the Okui (fire on the third day) of the Obon festival of the lunar calendar to send off ancestors to the other world, a  way to comfort the Buddha who has no relation to them, to ward off evil spirits. 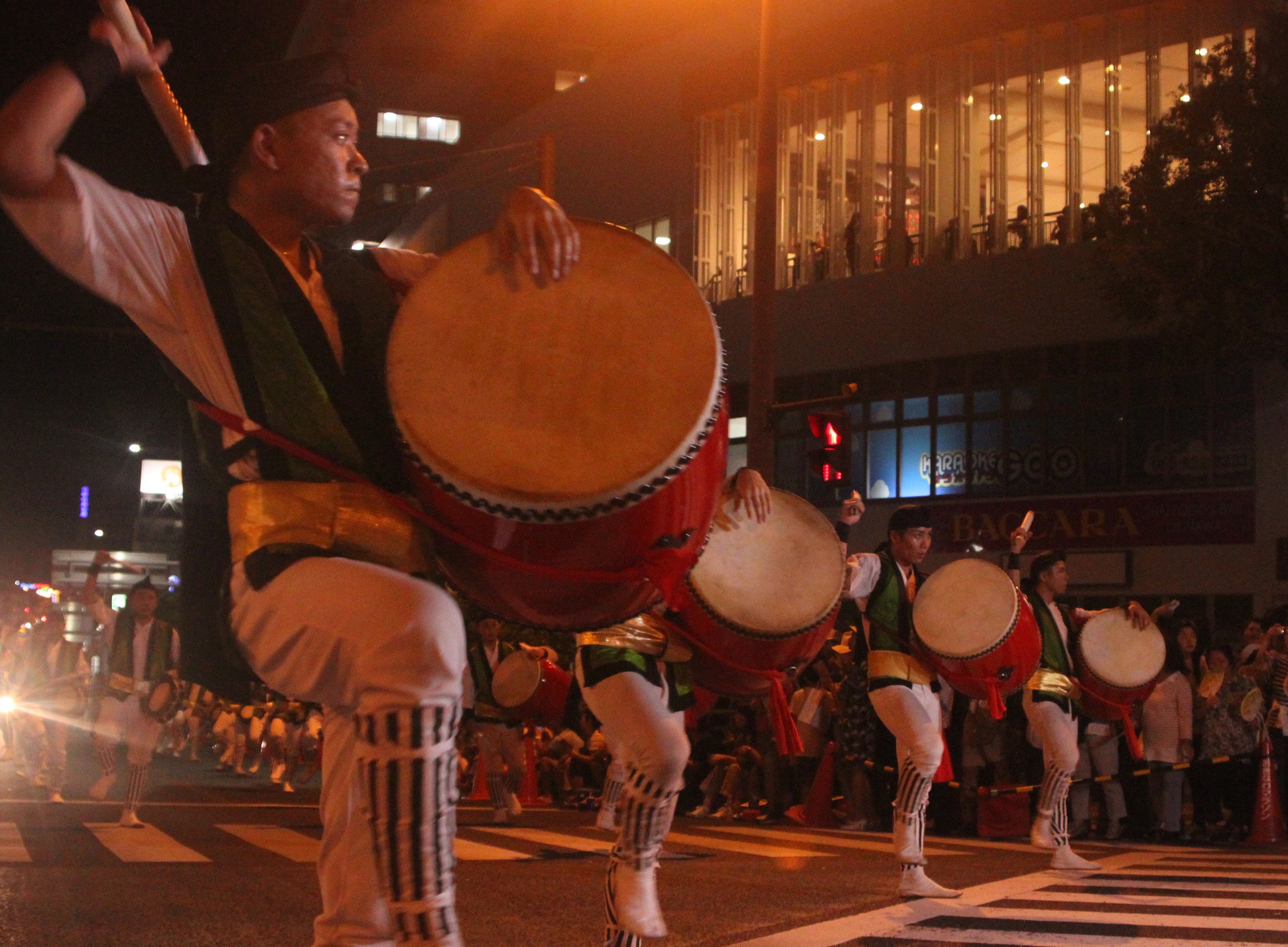 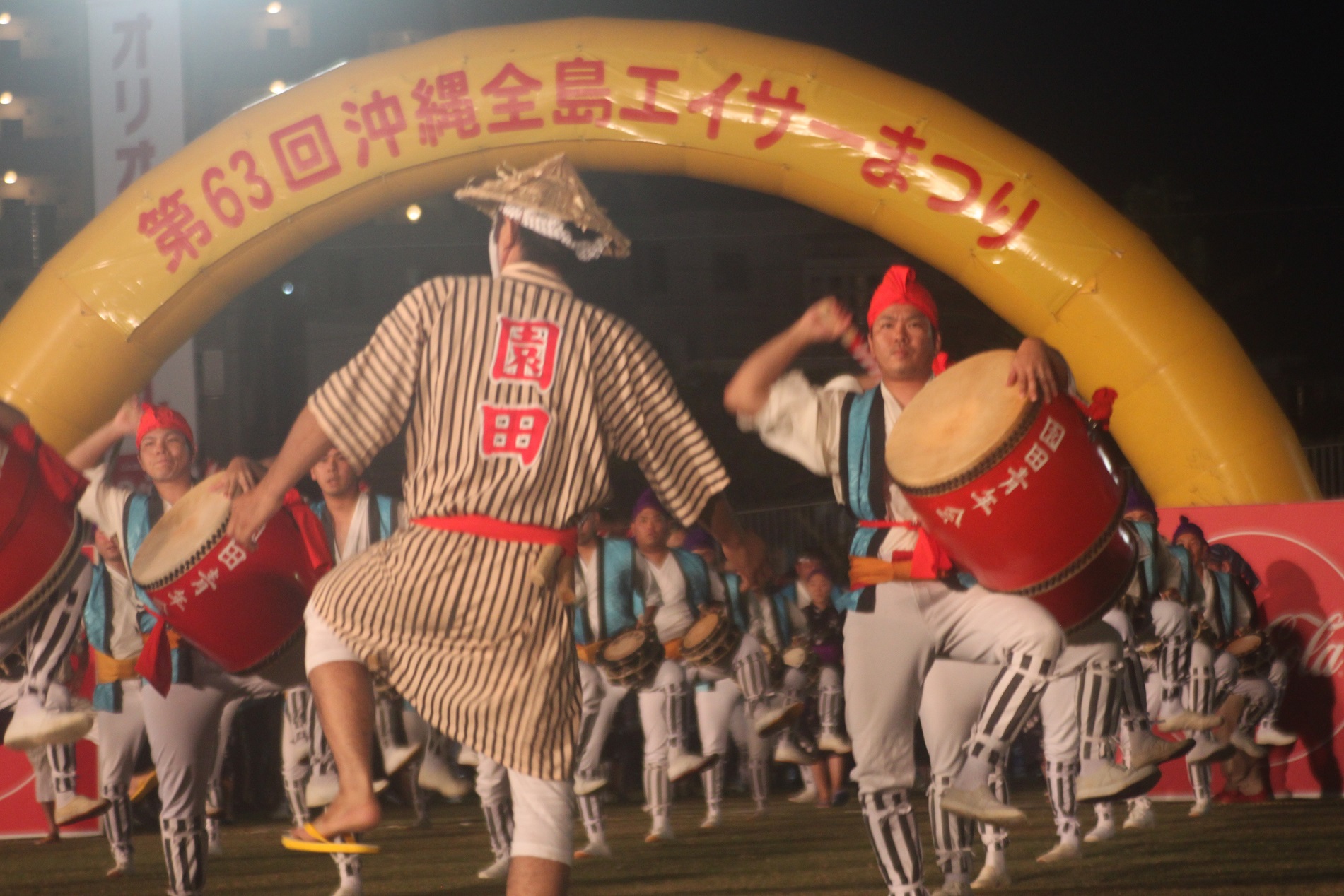 As a result, Eisa has spread to many groups and regions based on its origin, and now there are groups all over the world. Some groups have adopted the traditional kata of the Seinenkai, while others have created their own "creative eisa," dancing in a spectacular manner separate from events such as Obon.

However, the appearance of

(Ryukyukoku Festival Drumming), which was created as a group that danced only eisa apart from local events, was a shock and a novelty for Uchinanchu. Nowadays, some people prefer the creative eisa.

The following video is a feature story on the "60th Anniversary of the Okinawa All Island Eisa Festival" on the Okinawa City information program "Behind the Scenes at Koza".

(This is an Okinawa City PR program supervised and planned by Okinawa City, and as of Tuesday, July 27, 2021, it is Vol. 415, and is being broadcast in Okinawa Prefecture on RBC every Monday night from 25:30.

I thought I would introduce you to the lively atmosphere of the All Island Eisa Festival this time.

Even though the situation is still very severe, I hope that the new coronavirus will be under control as soon as possible, and I pray for everyone's health.

I can't wait to laugh and enjoy the eisa with everyone!

In this article, I introduced Eisa, a traditional Okinawan summer poem, as an introduction to Okinawa City.

Okinawa City is a city where you can feel the real Okinawa, it is not found in guide books.

From now on, I will introduce more about Okinawa City around the end of each month.

In the next article, I will introduce KOZA, which is often referred to as Okinawa City.

Where is Koza? Isn't it a city? Is there such a thing as Koza 0-banchi, Okinawa City? Why is it in katakana?

Why is it in katakana? I'm planning to update this article to include the origin of the name "Koza"!

Please look forward to it.